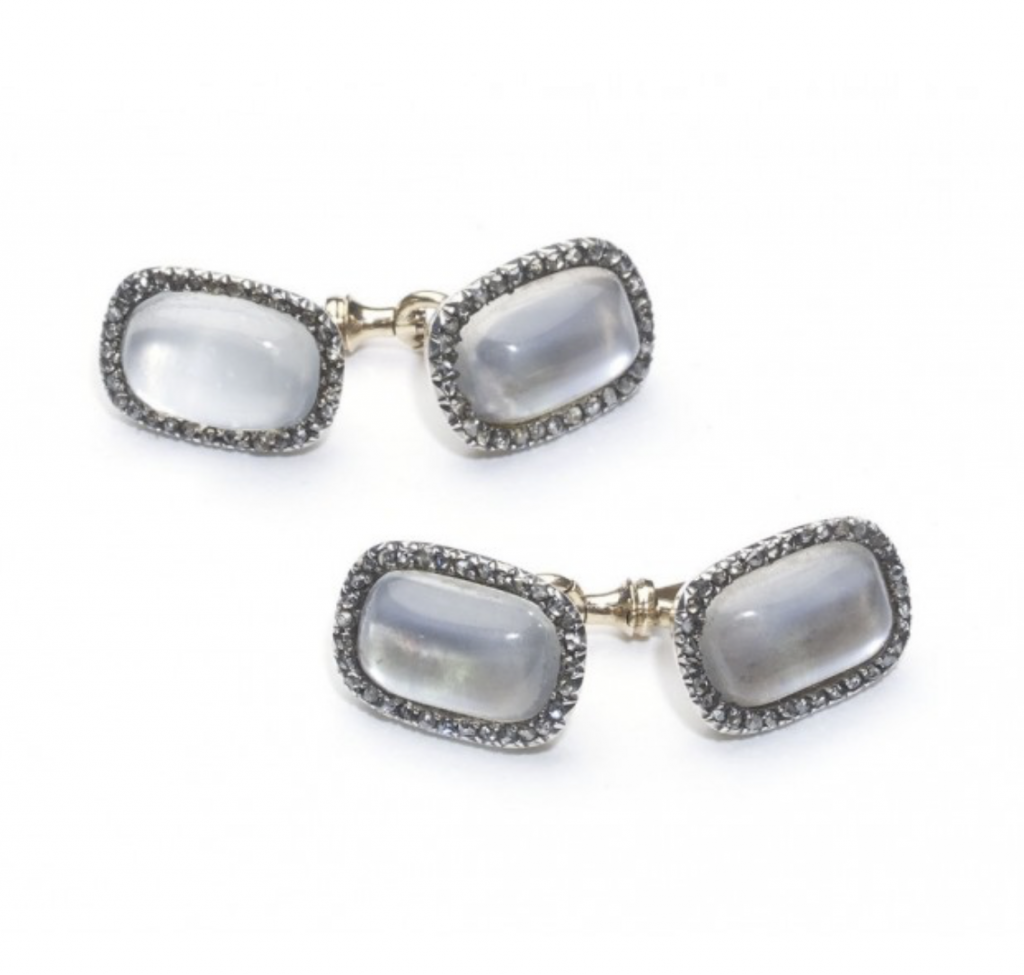 The history of cufflinks is intimately related to the history of the shirt. Cufflinks are the ultimate fashion accessory and the perfect gift for a man.

Originally worn as an undershirt, the sleeve emerged very daringly in Renaissance fashion, tied at the wrist with silk strings or ribbons and was later embellished with lace ruffles.

This then gave way to a more practical and more decorative button fastening or even a pair of buttons, fastened together either by  a uniting bar or chain. These were made of many different materials including glass, stone, leather, metal, precious metals and other combinations.

Buttons were usually very ornate, often quartz crystal or glass, painted on the underside and mounted in silver or gold and were very expensive to produce. For this reason they became a status symbol and were popularised as the desirable playthings of the upper classes at court.

By this stage, the turned back French coat cuff favoured at the court of Louis XIII shows off perfectly the sleeve buttons. This gives way to the shirt boutons de manchette of Louis XIV, now more recognisably in the style of the cufflinks we know today, passing through and fastening the sleeve.

A pair of antique Wiese intaglio cufflinks, set with cornelian intaglios, mounted in 18ct gold. The intaglios depict a child’s head; the bust of a philosopher; Hygeia, the Greek goddess of hygiene, with a serpent around her neck, this intaglio is dated to circa third century A. D. and Gryllus, a Greek mythological character, who was half man, half pig, with two faces, one on his stomach this intaglio is dated to circa second century A. D.. The cast mounts depict three rows of rope style wire twists, with a beading surround, in fine gold, with carabiner fittings, with French eagle marks, signed Wiése. . Accompanied by an invoice dated 1925 £20,000

Legend has it that it was Alexander Dumas, who’s fictional Count of Monte Cristo was described in 1844 as wearing gem set cuffs that sparked the envy of every onlooker that set the fashion for wearing sleeve buttons in full motion.

The Industrial Revolution of the 1800s at this stage allows for the cheaper steam-driven mass manufacture of cufflinks set with replica gems, rhinestones and paste, pinchbeck and  marcasite for materials allowing the man in the street the opportunity to dress with aspiration

Detachable collars and cuffs on shirts now require studs and links for fastening.  In 1882 George Krementz develops a machine based on cartridge shell manufacture which makes cufflinks and studs affordable for all.

Victorian taste at this point becomes less elaborate and favours gold and enamel work over gemset. This fin du siècle style reaches its apogée with the radiantly brilliant guilloché or machine turned enamel work made famous by the houses of Fabergé,  Cartier and Tiffany.

A pair of antique, Fabergé, diamond and enamel cufflinks, with alternating diagonals of pale lilac guilloché enamel and rose-cut diamonds, mounted in silver-upon-gold, with chain links. Circa 1896, with AH mark for workmaster August Holmström and with the coat of arms for St. Petersburg before 1899 £35,000

The Edwardian era allows for platinum mounted lighter and more elegant designs now set with precious stones and enamel work, a style which remains popular through to the Art Deco era. Every top jewellery house is now making extraordinary signed examples for their customers.

Some cufflinks can be folded and inserted through both buttonholes into position. Others have a folding retractable bar which does the same. Others are one sided with a rigid angled bar with toggle. A snap-on link is also developed for ease of wear.

A pair of Tiffany & Co. gold and enamel cufflinks, with solid, concave, oval heads, each edged with a band of blue enamel and a surround of gold, mounted in 18ct gold, with bar fittings, signed Tiffany & Co., and T & Co, stamped 750  £4,950

The most popular design remains the double sided cufflink fastened by interlinking chain or bar.

Cufflinks are now more personalised and are decorated in a multitude of ways, with gemstones, inlays, inset materials or enamel. They depict insignias, monograms, family crests, mementos, memberships of clubs, universities, regiments and sporting activities, They become the status symbol of the discerning gentleman.

A pair of Art Deco sapphire and diamond cufflinks by J. E. Caldwell, mounted in platinum, with a directional finish, with a diagonal line of pavé set old-cut diamonds (36 stones approximately 0.70ct), with sapphires set at the ends (16 in total, French-cut calibré baguettes approximately 0.35ct), numbered J20173, engraved H van S to BHH 1922, in a J. E. Caldwell box, with the initials B.H.H. £6,000

With the pre-war relaxation of formal wear popularised by the Duke of Windsor, the later economic stringencies post WWII and the introduction of the mid-century button cuff, the popularity of cufflinks declines as that of casual sportswear increases.

Then in the 1980s the reintroduction in the City of London of the French cuffed shirt as office wear de rigueur sends a generation of young bankers raiding the wardrobes of their fathers and grandfathers in quest of the appropriate cufflinks.

A Cartier amethyst and diamond dress-set, with a pair of cufflinks and three shirt studs, set with cabochon-cut amethyst centres, with diamond set surrounds, cufflinks signed “Cartier Ld. London”, mounted in gold, in an original Cartier fitted case, circa 1920 £24,000

Traditionally cufflinks are given as a gift, not purchased by the gentleman himself. This custom originated when cufflinks were given in the royal court to commemorate a marriage or a formal occasion and it is a tradition that has continued today.

We pride ourselves on having one of the finest and most exclusive collections of signed, antique and vintage cufflinks and dress sets to be found worldwide. We are certain we can assist to find the perfect gift for any occasion.

We can be found at our premises in Burlington Arcade, London