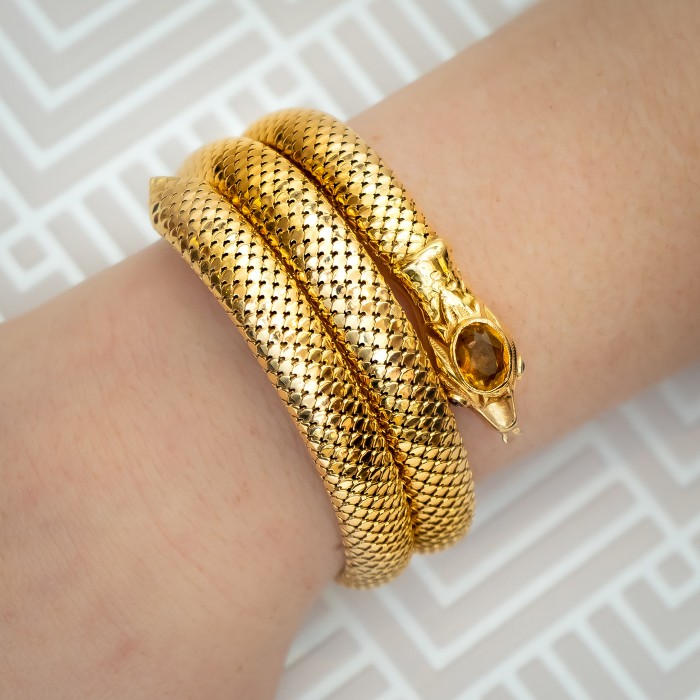 How and why snakes became a recognisable motif in jewellery designs, from Bulgari to Cartier

A Victorian snake bangle, set with diamonds and rubies, embellished with red guilloche enamel. Circa 1860.

You may have noticed that snakes appear frequently in the jewellery world; coiled around themselves to form a bangle or bracelet; two snakes entwined with each other to create a ring; a snake biting its own tail as a necklace – but what makes the serpent so illustrious and what makes snakes in antique jewellery so collectible?

The History of Snake Jewellery

Stretching as far back as ancient Greece, the snake has remained a popular motif used in many aspects of craftsmanship. Not only does the snake’s flexible body lend itself well to creating numerous shapes, the snake has gained various meanings in different civilisations across the world. The Egyptians viewed the snake as a symbol of royalty and divine authority. An upright cobra (or Uraeus) can be seen on Tutankhamun’s death mask, symbolising Wadjet – the serpent goddess.

King Tutankhamun’s mask, bearing a cobra to the forehead.

Similarly, the Ouroboros – the depiction of a snake or serpent eating its own tail – was first discovered in ancient Egyptian iconography, and was later adopted by alchemists. It is commonly perceived to symbolise the cycle of life, death and rebirth.

One of the earliest known appearances of the Ouroboros, shown here on a shrine enclosing Tutankhamun’s sarcophagus.

In more recent times, in 1839, Queen Victoria became engaged to Prince Albert. His choice of engagement ring was a snake; decorated with rubies for the eyes, diamonds for the mouth, and an emerald set within the head, representing the Queen’s own birthstone. This symbol of everlasting love and eternity catapulted the snake into popularity amongst the general public.

Queen Victoria’s engagement ring, as designed by Prince Albert. It is thought that the ring was buried with Queen Victoria.

Now a fast-growing fashion trend in England (and later Europe), the snake had begun to become the must-have jewellery accessory. As Queen Victoria was seen out in public, jewellery manufacturers started to emulate the monarch and produced coiled snake rings, cuff bracelets and flexible necklaces. Soon it was acknowledged that giving a piece of snake jewellery was to signify eternal love, and happiness. Snakes in antique jewellery are something worth keeping an eye out for because they’re both collectible and desirable.

An antique blue enamel snake necklace, set with pearls and diamonds, with a free-hanging heart pendant. Circa 1860.

The Modern Age of Snake Jewellery

It’s not just snakes in antique jewellery that have jewellery lovers all excited! The 20th Century saw many prestigious design houses contribute to snake jewellery; Cartier famously created an exquisite diamond necklace for Mexican actress Maria Felix in the year 1919. The platinum collar took many months of hard work and skilled craftsmanship to produce. Maria’s love of reptiles led her to commission more snake pieces, including the iconic reversible serpent necklace that remained in her collection shortly before her death in 2002.

This later piece, completed in the 1960’s, was a masterpiece of design; it measured 22 inches long, and was adorned with over 2,400 brilliant and baguette-cut diamonds weighing a total of 178.21 carats. The reverse was beautifully enamelled in blue, green and red to represent scales.

A pair of the actress’s gold and turquoise coiled snake hoop earrings fetched over 45,000 USD in a sale held by Christie’s New York auction house in 2007.

Throughout the years, snake and serpent pieces have remained popular and highly collectable amongst jewellery lovers. They are as appealing today as they always have been, catering to all generations and markets across the world. Luxury designer houses such as Bulgari continue to produce snake jewellery to this day under the collection name “Serpenti”, including their infamous gem-set and diamond-studded bangles and wristwatches.

Buying snake jewellery in today’s market is exciting, due to the sheer variety of designs, periods and materials available to us. There is no doubt that whatever your tastes or preferences, there is a snake piece out there that will fit right in with your style.

A vintage gold snake bracelet, set with citrine, available with matching necklace. Circa 1970.

So, whether the slithering reptile symbolises something significant to you, or whether you simply enjoy the aesthetic, consider adding a snake or two to your jewellery box. They have proved themselves to be utterly timeless, and will undoubtedly remain so for many years to come.