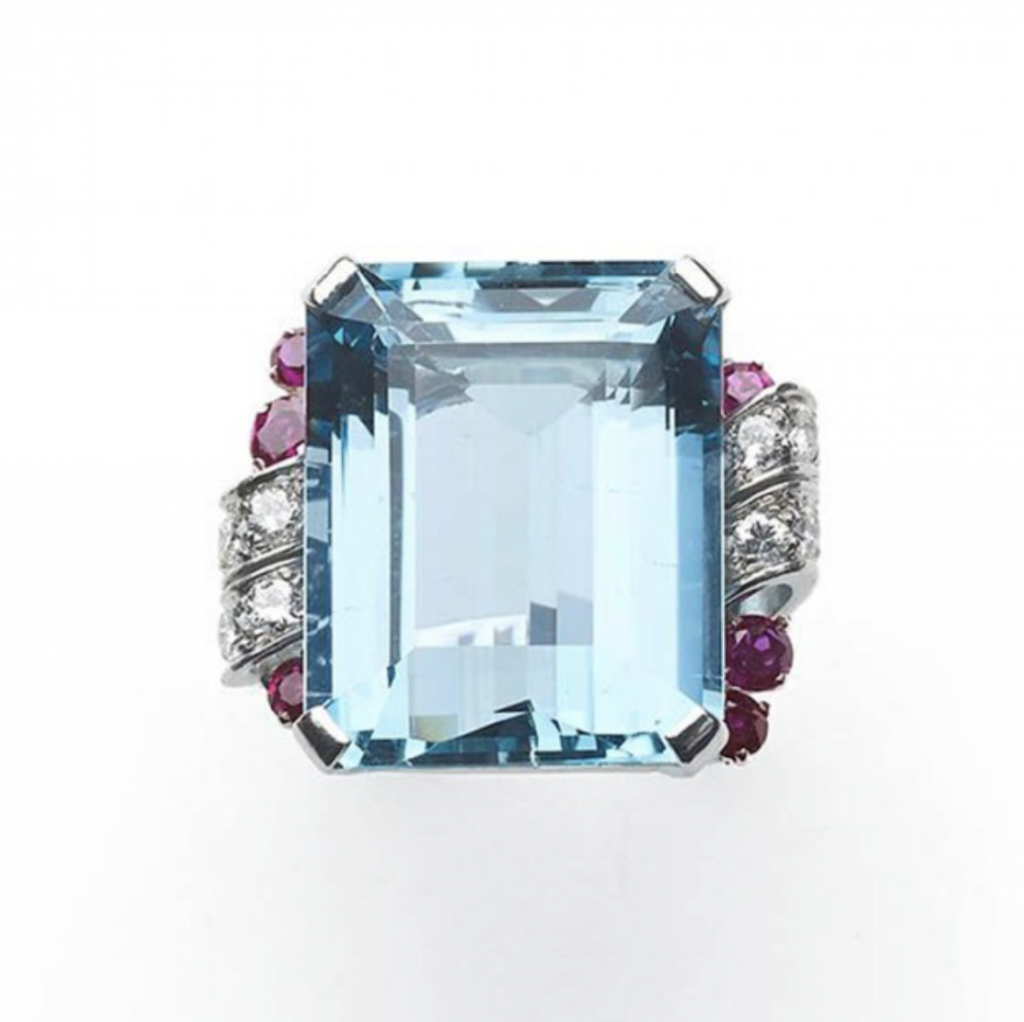 Aquamarine is the birthstone for the month of March. The seawater colour of aquamarine has given this gemstone its name. “Aquamarine” is derived from the Latin word for seawater.

Aquamarine is a valued gem of ancient lineage. In the 19th century, sea green varieties of the stone were the most popular. Today, the more blue the colour, the more valuable the stone. In 1910, the largest ever aquamarine was found in Brazil.  It weighed 243 pounds. It was then cut into smaller stones, yielding over 200,000 carats.

A vintage, Tiffany & Co. aquamarine, ruby and diamond ring, with a step-cut aquamarine, weighing approximately 28.34ct, in a four claw setting, with double scrolls either side, each scroll set with three round brilliant-cut diamonds, in grain settings, flanked by three rubies in claw settings, one above the scrolls and two below on one side and two above and one below on the other, mounted in palladium, in a two part shank, signed Tiffany & Co., marked 950 palladium, with engraved initials C.J.F., circa 1950. £25,000

Aquamarine in legend is believed to contain the power of the sea. It has been dedicated to sea goddesses such as Aphrodite. Sailors have used the gemstone throughout history to protect them from storms and drowning as well as to insure a safe arrival back home after a voyage. The gemstone is said to be the stone of courage.

This gemstone is said to re-establish a loving communication between couples that have grown apart. It can  attract overseas business or connections. It can help to overcome fears and phobias, especially those regarding water, such as swimming and travelling. It is said to induce calming energies that reduce stress and quiet in the mind. It invokes tolerance of others and helps to filter information to the brain to encourage clarity.

An antique aquamarine cannetille viola flower brooch, set with five, pear-shaped aquamarines, in closed-back settings, with foil to the back of the stones, in an open filigree surround, mounted in gold, with a later pin and roller catch, circa 1830. £2,850

It can help with travel sickness especially sea-sickness, sore throats, tooth and gum problems and water retention. This stone is also said to help with digestive disorders, kidney problems, colds and respiratory difficulties. It is thought that it can also ease panic and pain. The powers of this stone are said to be emphasised when in water however wearing the stone can still be very beneficial.

Aquamarine is also a stone connected with travel, it can aid in the safety of your travels or open opportunities to widen your travels both physically and mentally.

To recharge the powers of this gemstone by placing it in a blue glass bowl filled with sea water (or water with a pinch of salt) on a full moon and leave it overnight then rinse with fresh water in the morning.

Our collection of aquamarine jewellery  be viewed on our website or at our premises in Burlington Arcade, London