How to describe Moira? It is difficult to convey the intense enthusiasm and passion for her business and the world of antique jewellery that was the essence of Moira. Her capacity for hard work, her energy and discipline were the cornerstone of founding and building her business.

Having established her original shop on New Bond Street, she went on to larger premises while simultaneously travelling the world seeking and nurturing new markets. Never one to stand still, Moira was always interested in how things could be done differently and in a fresh new way, long before the establishment of the internet in our everyday lives.

Moira was a consummate ‘people’ person and loved to travel, meet friends and make new ones, equally at home seeking treasures in Portobello Market or greeting friends and customers in her luxurious retail shop. This year saw both Moira’s 80th birthday and the 50th anniversary of her business, in which she had been joined by her children Suzanne and Simon.

Latterly Moira had retired happily to join her sister in Florida, but her frequent visits to London meant that she kept up her friendship with so many members of our trade and the business is continued by Suzanne and Simon.

Moira was truly unique, ahead of her time and an inspiration to many now established dealers that she had a kind word for when they first came in to the trade. She will be sorely missed by her many friends, her children and her five grandchildren. 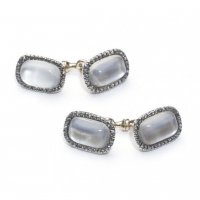 The history of cufflinks is intimately related to the history…