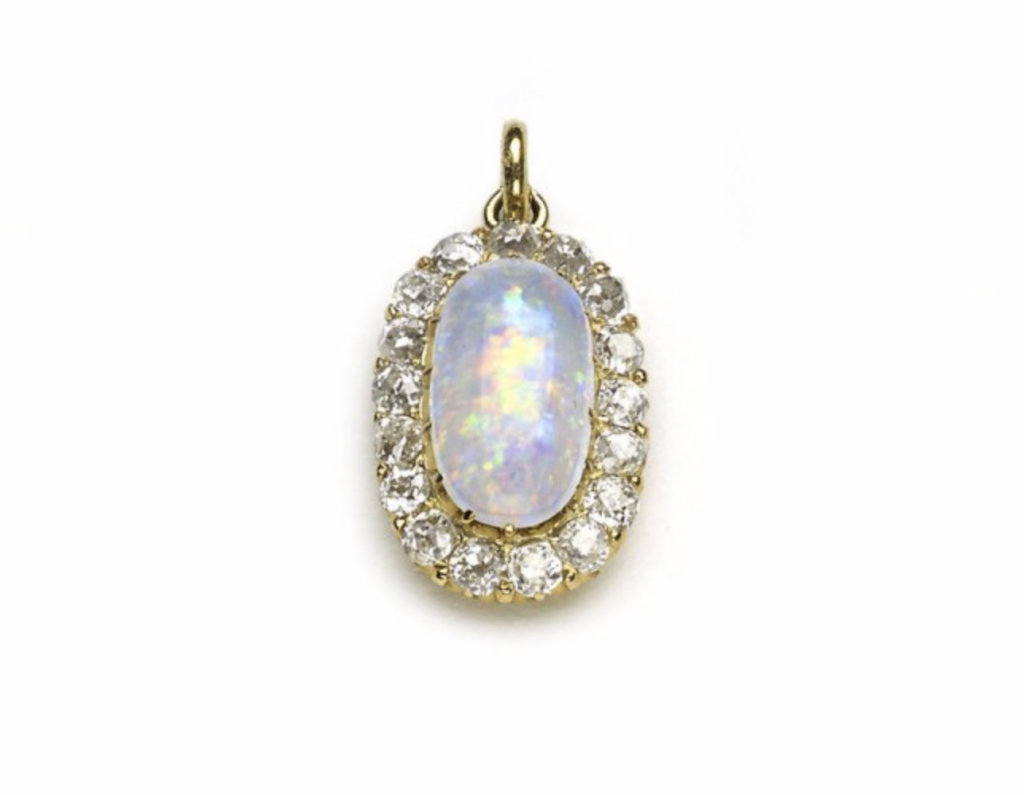 The opal has been highly valued since long before the Ancient Greek and Roman eras. There are two main types of opal: precious and common.

The precious variety shows that magical play-of-colour which is so highly sought-after. It captures the attention and imagination of anyone who lays eyes on one of these gemstones.

A late Victorian opal and diamond crescent pendant, set with eleven, graduating, oval cabochon cut opals, with pairs of old-cut diamonds set between, in grain settings, with a cut down side and pierced gallery, mounted in gold, circa 1888, with a plaque marked l.b.88, on a modern, 18ct gold trace chain. In Victorian symbolism the crescent or new moon symbolised a new relationship. Hopeful it will “wax” into matrimony £5,500

The more common variety simply does not show this optical effect. It can come in a variety of colours from pink to green to blue to yellow.

A vintage opal and diamond ring, set with an oval opal, with green to blue play of colour, in a textured surround, with four round brilliant-cut diamonds set in each quarter, with a scrolled gallery and engraved shoulders, mounted in platinum, circa 1950, with marks TO and Pm £3,200

Another variety is known as fire opal, which is a transparent to translucent variety. It can be orange, red or yellow and sometimes displays a play-of-colour, but often does not.

An antique opal and diamond brooch, with an opal with a predominantly red play of colour, mounted in gold, with four groups of three old-cut diamonds, in silver-upon-gold, millegrain edged, rub over settings, with a loop to convert to a pendant, circa 1900 £8,800

The Greeks believed the opal gave one the power of prophecy and foresight. Opals enjoyed a long period of favour. The Romans thought that opals represented purity and hope. Opals were regarded in high esteem until the 18th and 19th centuries. Then perception changed and they were believed to be unlucky, causing misfortune and bringing harm to the wearer.

Prince Albert gave Queen Victoria the Oriental Circlet Tiara that featured 11 precious opals. These were later replaced with rubies by her granddaughter Queen Alexandra, who believed them unlucky.

Antique butterfly brooch, mounted in silver-upon-gold, set with an opal to the body, old-cut diamond set wings, emeralds and cabochon-cut rubies, circa 1880 £23,000

Prized precious opals were relatively rare prior to the 19th century. The best examples come from present-day Slovakia.

A gem set bee pendant, with an oval cabochon cut opal and amethyst set to the body, articulating wings, set with eight-cut diamonds, and ruby eyes, on a trace chain, mounted in gold, with white gold settings for the diamonds £18,500

Today, there are many localities where opals can be found. The best and most valuable ones were discovered in the late 19th century in Australia. Places of highly desirable opals include deposits in New South Wales called Lightning Ridge and White Cliffs.

Our selection of of opal jewellery can be viewed at our premises at Richard Ogden, 28 Burlington Arcade, London

ANTIQUE JEWELLERY - why buy antique and not modern?