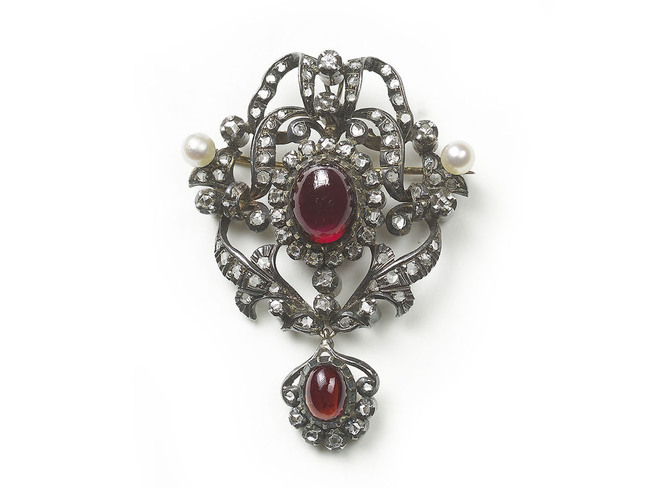 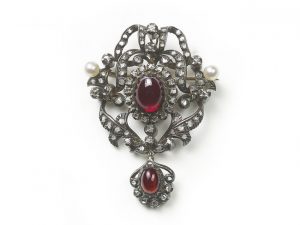 Symbolic of prosperity and good health, it traces back the Bronze Age used in Ancient Egyptian jewellery. During the Middle Ages, it was exchanged to signify trust and affection.

Garnets can be found in an array of stunning antique jewellery, red garnet’s availability increased with the discovery of the famous Bohemian garnet deposits in central Europe around 1500.

Garnets are not only red they come in array of colours greens, oranges, pinkish oranges, deeply saturated purplish reds, and even some blues.

Victorian pieces often are set with garnets and cut as cabochons and normally with pearls or diamonds. Garnets became massively popular set in suites, occasionally foil backed to enhance the colour and often set in yellow gold – giving that warmth and richness of colour.

We have some amazing pieces of antique and vintage garnet jewellery: 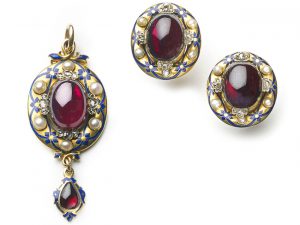 A Holbeinesque style Victorian pendant and earrings suiteset with cabochon garnets and rose-cut diamonds, with gold surrounds, decorated with blue, champlevé enamelled garlands, set with natural half pearls. The backs are engraved with foliage and flowers. There is a locket section at the back of the pendant, with woven hair, circa 1860-1880. Unsigned.
Pendant approximately 65mm long, 25mm wide; earrings 25mm long, 22mm wide. 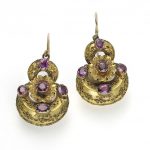 A pair of Victorian, gold earrings, with Etruscan style work, set with almandine garnets, on hooks, circa 1870. 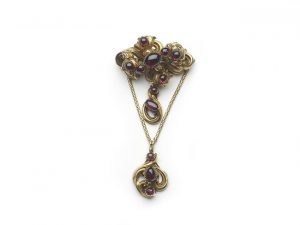 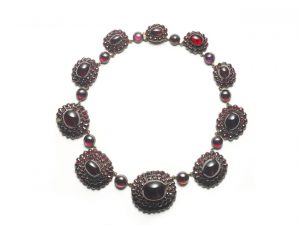 Then to the more unusual colours of garnets –

Demantoid garntes are the rarest type of garntes and get their desirable green color from the inclusion of chromium into the andradite composition. The color ranges from yellowish or brownish green to an incredible, bright yellowish green. The finest Russian material is the most prized and it’s the colour green by which all demantoids are judged. Stones with typical and well-formed horsetail inclusion  an inclusion unique to demantoid and found in most Russian specimens 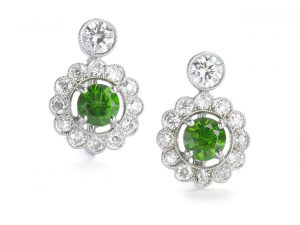 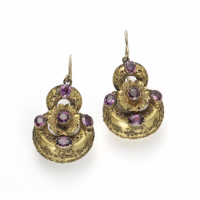 Garnet, the beautiful and diverse birthstone for January, comes in…